I have a new addiction. Pinterest. It's not too terribly bad because I only "pin" things I could do (except for some of the things in my "for the home" board). I've committed to try as many "pins" as possible. My first adventure was this tie rug. I watched the tutorial and it seemed pretty easy. The lady said it should take 1-2 bath towels and 2 hours. Even better.
Well any project I start never seems quick and easy. Ask my mom. She's still waiting for this great idea I had for a Mother's Day gift two years ago.
So we went the the store and bought the rug thing for about $3. I had two really old sheet sized bath towels and at least 4 hours before I went to work. I started cutting the bath towel and realized this was going to take WAY more then 4 hours and my two SHEET sized towels were not going to cut it. Plus after all the cutting I walked away with a blister.
A week later (I spent a little bit each day), 2 sheet towels, one bath towel, and one hand towel later I have a nice bath rug. Another thing the tutorial lady failed to mention is that it's extremely messy to cut towel! We still have towel flakes in our bathroom. 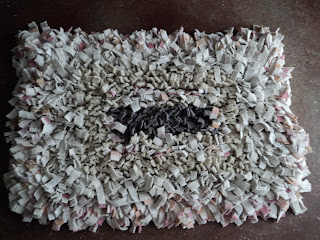 And you're probably thinking "nice grey box". I was running out of used towels that I didn't want to cut up. This only left me with a grey hand towel from my college days. Hey it worked.
It's really nice and fluffy! 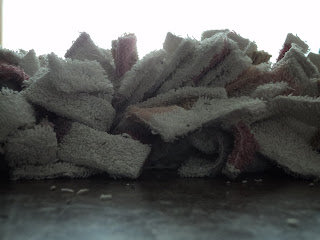 I'm not giving up on my Pinterest ideas yet!
I added another notch in my sewing resume. I successfully altered a bridesmaid's dress for a coworker. Surprisingly it wasn't too difficult! 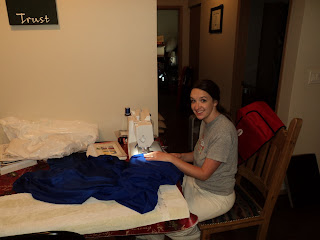 Then we went camping at Dworshak State Park. It was a blast!! And Jake was able to fish! 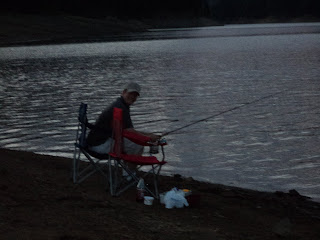 As Jake was chopping up some wood his hatchet came loose. As a last hurrah he threw it at the tree. 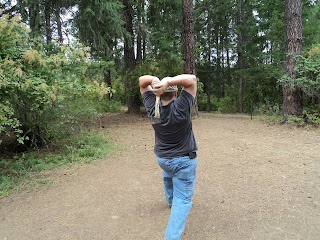 And believe it or not it stuck on the first try!!! We thought it was cool! 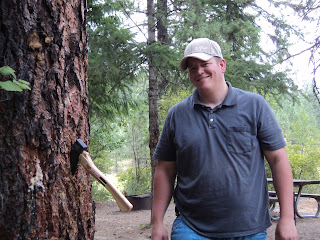 We burned the handle of the hatchet and then put on a new handle when we got home! Yep we recycled.
This is another tent of ours that fits us and the dogs! They love it because the sides are screens and they can look out. 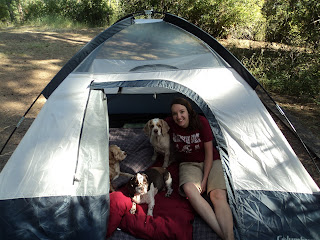 We've been fishing on the Snake River. In the spring the hills are green and it's quite the sight. 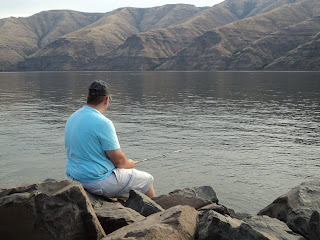 And it's that time of year again. College Football.
This game we beat Idaho State Bengals 64-21. It's always nice to go to a game when your team wins! 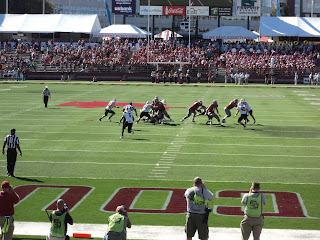 And then there was this game. WSU vs. UNLV. Jake sported his Cougar shirt. I wore my Rebels shirt. It would have been so much more entertaining if the game was a little big closer. Okay a lot closer. The final score was 59-7! Yeah. As we were walking out UNLV finally scored! That was probably the most exciting moment in the entire game! It's not so fun when your team only scores once! 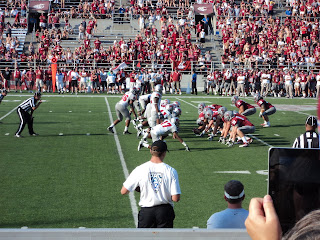 We also attended a birthday party. Oh and a pow wow!! It was pretty interesting. We even spotted an indian wearing a cowboy hat. haha I thought it was so funny. Well school started, which means college kids are drinking and work at the PD is extremely busy. And I think I under estimated how busy and tired I would be so my friend and I bailed on the Muddy Buddy.
Halloween is around the corner and we are pretty excited!!
Posted by Jacob and Emily at 10:41 PM

Your pinterest project was much more successful then some of mine have been. I am totally addicted too. Some weeks worse then others, but I LOVE that site! Jacob and Emily
We were married in 2004. Just moved to Washington and life is good! Emily has a BA in CRJ, loves to be outside, has to pick up the house before she goes to bed, loves to play board games and the Wii, loves her dogs, is a window shopper, enjoys music, running, hiking, and camping, likes to give gifts and hates to receive them, gets anxiety easily, loves cake cookies, and isn't really into pizza, ice cream, and falls asleep during movies! Jacob is a college student, a movie buff, loves technology, likes to watch the stock market, would be a politician in a heart beat if asked, is cleaner then his wife!, loves his dogs, wants to live in the East, loves to mow grass, misses the green, hates the brown, loves to travel, camp, fish, and spend time with family.